In 1998, the Piarist Fathers, headquartered at Frank Lloyd Wright's Graycliff in Derby, placed the estate for sale. It had been constructed in 1927 for Darwin Martin and his wife, Isabelle. The Catholic order owned the property for over 40 years and had made alterations and constructions as needed to meet their mission. One of those was the erection of a dormitory (later called the school building) on the small plot once where Martin grandchildren recall playing. On that building was a large concrete mural by sgraffito artist Jozef Slawinski.

After the Graycliff Conservancy purchased the estate in 1999, they set about removing the non-Wright structures on the property. The school building was to be demolished in the early autumn of 2002 and with it the mural unless some organization stepped forward to remove it. The Polish Arts Club, headed by Peter K Gessner, managed to raise enough money to save the mural. The view seen by the Martins as they entered their property was restored. Use the slider to move back and forth through the before and afterimages.

Peter Gessner, Ph.D. (May 3, 1931 - June 27, 2014), was a man of many talents. After escaping the Nazi occupation of his homeland in Poland, he eventually came to the U.S. and then to U.B. where he taught pharmacology for 44 years. Additionally, he became director of an academic exchange program with Jangiellonian University in Poland. His biggest local accomplishment was in serving as president of the Polish Arts Club of Buffalo for thirteen years. In that capacity, he championed the recognition and preservation of the works of artist Jozef Slawinski who created a number of sgraffito murals in Western New York.

In the early years of the 21st century, Dr. Gesser and his Polish Arts Club was faced with an enormous challenge with the Slawinski mural at Graycliff. The mural had to be removed by those with an interest in preserving it, or it would be destroyed when the school building was demolished as part of the restoration of the Graycliff estate. His club, with 400 members, raised enough money to have the mural removed from the nonhistoric school building at the estate and stored there for three years while he spearheaded additional fundraising and found a permanent location for the artwork.

He said, “Saving the 12-by-18-foot mural, the largest that Sławiński had created, was an epic project eventually accomplished by the Club at the cost of almost a quarter million dollars.”

In his last years, he had been working to save the Slawinski "Maid of the Mist" mural in Niagara Falls. It is another of the 20 local Slawinski murals Dr. Gessner envisioned as part of a "sgraffito trail" that art lovers from around the world could follow and admire.

The photo at left shows him at Graycliff early in the day on August 19, 2002, when a very large crane was preparing to lift the mural from the building, the culmination of three weeks of conservation preparation. Was he worried that it might not survive the extraction?

As this pictorial will show, his efforts and that of the Polish Arts Club were successful and the mural of St. Calasanctius is an enduring part of his legacy.

Jozef Slawinski, an artist who emigrated from Poland, shown here in 1967 at work creating the 12' x 18' mural on the front of the school building at Graycliff. His technique for this mural was sgraffito, and for this mural he applied four layers of concrete in different colors (black, red, yellow, and white). The colors are revealed when the image is scraped away from the still-wet concrete to create the desired image. For more on the artist, look here.

The Graycliff sgraffito was attached to the front of the building constructed by the Piarists and first used as a dormitory for Hungarian refugees and later a school. Photo courtesy of P. Mahoney, AIA. (first slide) 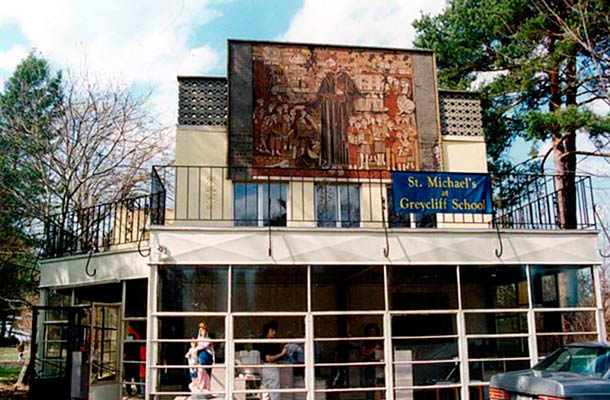 This was the first view visitors to the Graycliff estate saw, the sgraffito prominently honoring St. Calasanctius who founded the Piarist Order of the Catholic Church. 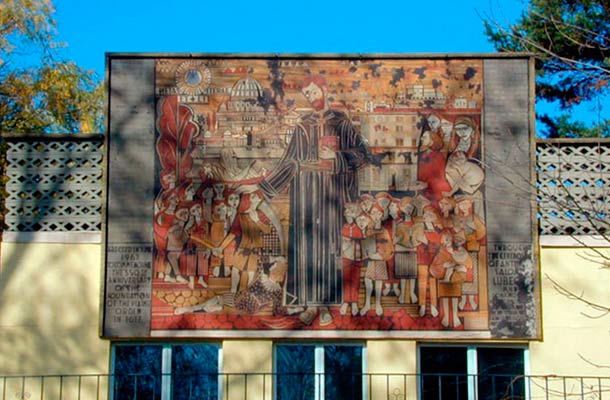 By 2002, the year the school building was demolished by the Graycliff Conservancy, the 35-year old mural was in need of conservation. 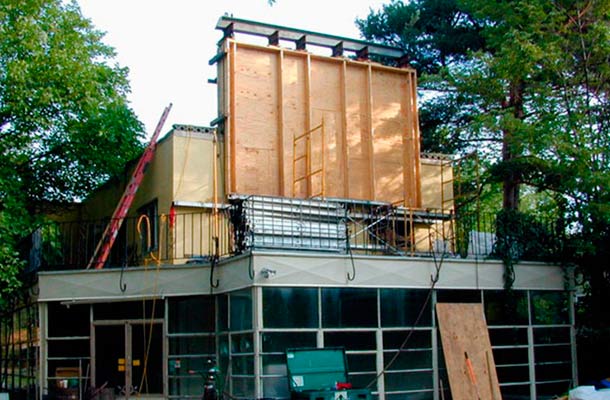 The Polish Arts Club of Buffalo raised enough money to have the mural removed from the school building before its demolition. Three weeks were required to prepare the mural for removal. 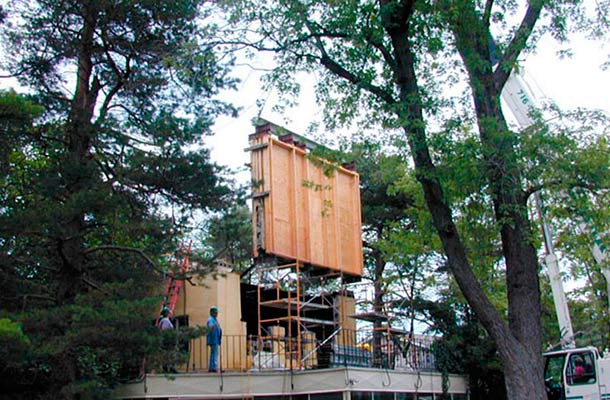 On August 19, 2002, the International Chimney Corporation made the final cuts on the concrete block building that released the mural for removal. 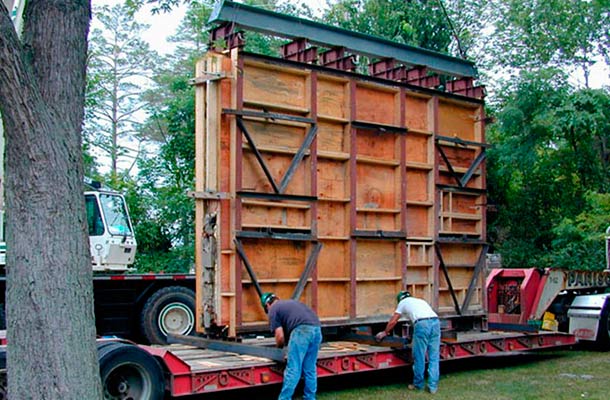 The 30,000 lb. mural was placed on a lowboy trailer for its brief move to the edge of the Graycliff property. 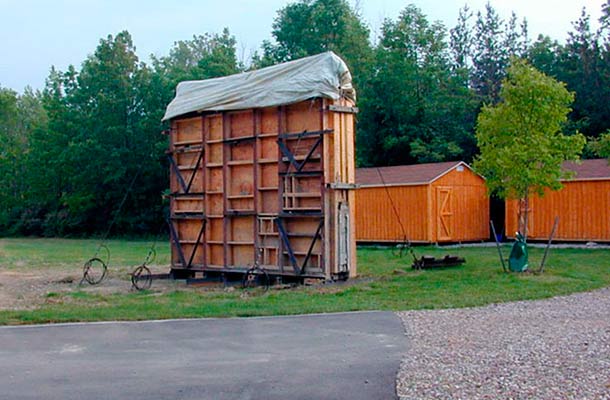 There the mural would remain for almost exactly three years while the Polish Arts Club raised the $225,000 needed to move and restore the mural. It was moved 20 miles to Buffalo on August 17, 2005. 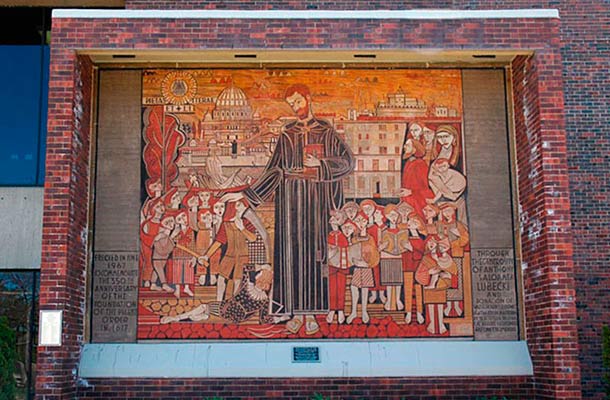 The initial destination of the Slawinski artwork was intended to be the Assumption Church on Amherst St., but the concrete backing added to stabilize the mural for removal made that impossible. In the end, Buffalo State College agreed to receive the mural. It is displayed on the north side of the E.H. Butler Library in its restored condition. (Last slide)

‹ ›
Navigate through the above eight slides using the controls or let it auto-scroll.
Thank you,Patrick Mahoney, AIA, for permission to use your 1967 photos of the mural under construction.